The first problem (running out of energy) can be avoided by making sure there is enough fuel in the tank at the start and that you top up enough during the event. Hydration is similar, you need to drink enough, but not too much! Then there are several ways to reduce the risk of getting gastro-intestinal problems.

Breakfast is probably one of the most important parts of nutritional preparation for a half marathon. Ideally a breakfast is consumed 3-4 hours before the race and contains at least 100 grams of carbohydrate and has a low fiber content (especially for those who often get stomach problems). Good sources of carbohydrate for breakfast, that are very easy to digest, include white bread with jam, bagels, cereals that are low in fiber, and if stomach and intestinal problems are never an issue, oatmeal and muesli. A good breakfast makes sure that carbohydrate is stored in the liver and this will make sure blood sugar does not drop during your half marathon.

“Drinking to thirst” is a recommendation that works fine for the slower athlete. If you are going a bit faster it is better to go in with a plan. It is good to use the early parts of a race when the gastrointestinal tract is working fine to absorb both carbohydrate and fluid. Later in the race, even though you may be thirsty, the gut may not absorb as much. Don’t drink excessively and use common sense. The goal should be to lose a little weight (2 to 4 pounds or 1-2 kg) at the finish line. You definitely want to avoid weight gain, which clearly would be a sign of drinking too much. In hot environments dehydration can definitely be a very important factor. Don’t forget that good hydration starts before the race, and hydrate well in the days leading to your race.

A large percentage of athletes, approximately 30 to 70 percent, experience gastrointestinal problems during long and half distance triathlon. Some of these problems are very minor but some of these may be so severe that they will affect performance. Some athletes are more prone to develop these problems than others. The complaints may be totally independent of food intake and sometimes they may only happen on race day. This suggests that “race day anxiety” has something to do with it. Studies have also shown that factors like fiber intake, fat intake and the use of very concentrated carbohydrate drinks are causes of gastrointestinal discomfort. So combining these three main issues, you need to plan ahead and have a rough idea where you are going to get your carbohydrate from (drinks, gels, bars), how much fluid you need to take in and where you are going to get this from (carry, special needs for feed stations) and make sure you reach approximately 60 g/h of carbohydrate intake and enough fluid to not lose a lot of weight. You can get a good idea by weighing yourself before and after training. Think about this in advance and write down your plan. 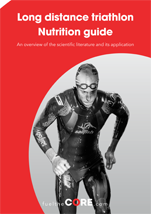